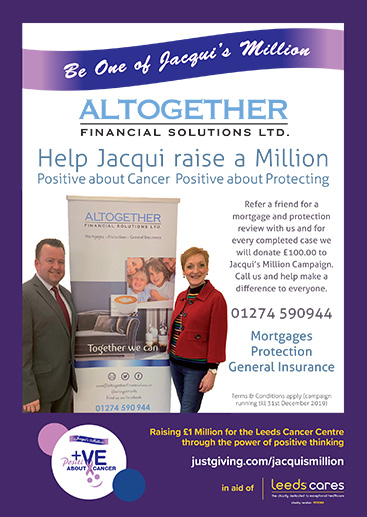 Refer a friend for a mortgage and protection review with us and for every completed case we will donate £100.00 to Jacqui’s Million Campaign. Call us and help make a difference to everyone. 01274 590944

In 1993, I had successful surgery to remove a small mole from my right leg, which was diagnosed as a Melanoma, and for many years after I was clear of cancer. However, in 2009, a lump appeared in the same place and after numerous tests unfortunately it was a secondary cancer, which is virtually unheard of. Some would say I am extremely unlucky, I say I am blessed as I was referred to the Leeds Cancer Centre, where since that time I have been receiving treatment as my cancer is malignant in stage 4.

Three operations on my leg by the amazing Howard Peach ensured I could keep doing what I do best – dancing and choreographing! In 2011, the Melanoma had spread to my lungs. Oral chemotherapy thankfully kept things at bay for two years, but the tumour in my right lung had escalated to such a degree that in February 2015, again another wonderful surgeon Kostas Papagiannopoulos removed the tumour and also my right lung.

Since then, I have continued with chemotherapy and other drugs for the side effects and although the above sounds devastating I am really positive and living every day to the full. Life expectancy for an “average” person with my condition is usually one year – but as the specialists say “I am not average”... and here I am nine years on! I say “Everyone is terminally ill, it’s just that I’m not getting off at this terminus”. I am still busy living a fun-packed life.

So, Jacqui’s Million is all about raising awareness, positivity and also much needed funds for the Leeds Cancer Centre.

During the time I have spent there as a patient, I have come to see first-hand the tremendous work they do, long hours, low pay, but with an ethos that is truly outstanding – they really are all angels. My goal and legacy is to raise £1 million for the Leeds Cancer Centre, and if I can get one million people to donate just £1 then the job would be done! This money will be used in a variety of ways, but specifically for all cancer patients from children to adults. We all know someone who has cancer or a loved one who has died from this terrible disease and every two minutes in the UK someone else is being diagnosed. So if you can please help me with my appeal as every penny donated does really count.

One day we will beat cancer.

This site uses cookies to improve your browsing experience. If you agree to their use please continue. Learn more